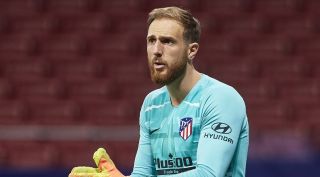 Chelsea target Jan Oblak will make a decision in the coming days over whether or not to remain at Atletico next season. The goalkeeper is a target for Chelsea boss Frank Lampard, who wants an upgrade on current first choice goalkeeper Kepa Arrizabalaga.

Oblak told Spanish media outlet AS that he would be making a decision over his future at the conclusion of Atletico's Champions League campaign. The Spanish club were eliminated on Thursday evening, following their 2-1 defeat to Bundesliga club RB Leipzig.

"It’s not the time to talk about that, right now we’ve got Leipzig to think about," said Oblak ahead of the quarterfinal clash. "I’ll assess the season when it’s over. There’ll be time after that to talk."

Atletico will be expecting an answer in the coming days, and hope the 27-year old will opt to remain at the club he signed for from Benfica for just €16m in 2014. In his six seasons at Atletico, the Slovenian has transformed into arguably the finest No.1 on the planet, keeping 105 clean sheets in 191 La Liga appearances.

Should Oblak decide to leave the Wanda Metropolitano, it will likely take a world record fee for a goalkeeper to persuade Atletico to sell. Oblak's deal runs until 2023, meaning the club are in no rush to cash in.

Lampard has made no secret of his desire for a new No.1, with Kepa failing to live up to his then-world record transfer fee for a goalkeeper after signing for €80m from Athletic Bilbao in 2018. Having already signed striker Timo Werner for £50 from RB Leipzig, and with midfielder Kai Havertz expected to sign for £80m over the coming weeks, bringing in Oblak would be seen as a serious sign of intent from Chelsea heading into next season.