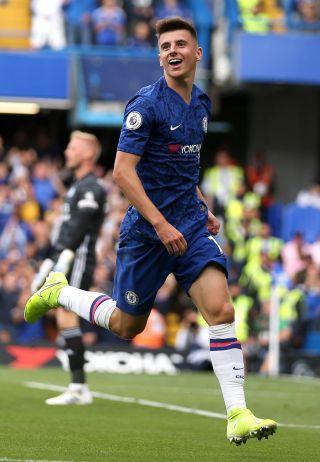 Mason Mount is likely to be rewarded with an England call-up after his impressive early-season form for Chelsea.

The midfielder has caught the eye for Frank Lampard’s Blues and is expected to be included for next month’s Euro 2020 qualifiers against Bulgaria and Kosovo.

Boss Gareth Southgate names his squad on Thursday and is a fan of Mount, having invited him to train with the seniors before last year’s World Cup.

The 20-year-old, who has scored two goals in four games this term, was called up for the Nations League matches against Croatia and Spain in 2018 but is yet to earn a cap.

James Maddison could be handed a first senior call after a good start to the campaign with Leicester.

The midfielder played for the under-21s in their disappointing Euro 2019 campaign in the summer.

Aaron Wan-Bissaka endured a nightmare tournament, scoring a late own goal as England lost 2-1 to France in his only game for the Young Lions in Italy and San Marino.

✋ @AWBissaka made 9️⃣ tackles on Monday night — more than twice as many as any other player on the pitch 🕸— Manchester United (@ManUtd) August 20, 2019

The defender was distracted by Manchester United’s interest, with boss Aidy Boothroyd unhappy with the speculation during the competition, before he finally completed a £50million move from Crystal Palace to Old Trafford.

But he has done well at United and is expected to join the senior side to compete with established right-backs Trent Alexander-Arnold and Kyle Walker.

It leaves Southgate with a selection headache at right-back after he also watched Kieran Trippier in Atletico Madrid’s 1-0 win at Leganes on Sunday.

Tammy Abraham, who made his senior debut against Germany in 2017, is also an option for Southgate.

The striker scored his first two goals for Chelsea in their 3-2 win at Norwich at the weekend.

Southgate and assistant Steve Holland watched Jack Grealish in Aston Villa’s 2-0 win over Everton on Friday and, while the midfielder is on their radar, this squad may have come too soon for the 23-year-old.

Leicester left-back Ben Chilwell has been nursing a hip problem, missing the 2-1 win at Sheffield United, but is expected to be fit.

“He’s been watching two other teams also but there’s a chance for good English players in our side to catch Gareth’s eye.”— Sheffield United (@SheffieldUnited) August 26, 2019

Goalkeeper Jack Butland’s poor early-season form for Stoke in the Sky Bet Championship may see him drop out after he was included in the Nations League squad in the summer.

Burnley’s uncapped striker Ashley Barnes seems a long shot for a call-up despite four goals in his first three games for the Clarets.

Dele Alli has been nursing a hamstring injury but is expected to return for Tottenham to face Arsenal on Sunday, leaving Southgate with a decision to make.

Everton’s Fabian Delph is likely to miss out having been battling a groin problem.

England are top of Group A after two wins from their opening two games.