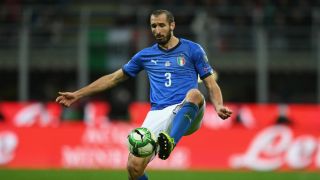 Chelsea boss Antonio Conte has ruled out a January move for Giorgio Chiellini and hopes the Juventus stalwart ends his career with the Serie A champions.

Conte coached Chiellini at Juventus between 2011 and 2014 and then subsequently at international level with Italy.

At a news conference ahead of Chelsea's Premier League trip to Arsenal on Wednesday, Conte discussed the vagaries of transfer market speculation before distancing himself from a move for the 33-year-old centre-back.

The Brazil international is on the mend from a knee injury and could return for the FA Cup third-round trip to Norwich City.

David Luiz has only played once for the first team since Conte unceremoniously dropped him in the wake of October's 3-0 Champions League defeat at Roma.

While he understands why a player on the fringes of his side might want to move during the January window, the Italian maintains he does not have the numbers to sell unless incomings are secured.

"I am very happy to work with these players and trust in these players. I don't see a problem but, at the same time, I understand that if some players are not playing with regularity [they want to move].

"My expectation is that all the players we have in the squad stay here and try to continue to work. Our squad is not big and for this reason it is impossible to send on loan or sell one player if we don't bring in one player."

Conte was widely rumoured to be unhappy with Chelsea's business during the close season before the defence of their Premier League title got off to an unconvincing start.

Asked about identifying potential new signings, he insisted that was a matter for the club and that his focus would be on his players on the training field.

"Honestly, my expectations can be a lot or not," he said. "The most important thing is I try to give my opinion to the club and then the club has to take the best decision for the team.

"I repeat, I give my opinion - I am only a coach. My main task is to work on the pitch to improve my players and my team.

"If the club decided to ask me something about my team I will try to give my opinion."