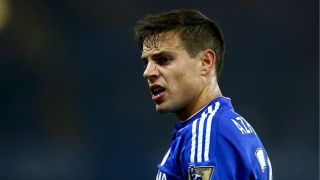 Antonio Conte feels Cesar Azpilicueta is arguably one of the best players in the world in his current role and believes Chelsea's 3-5-2 formation fits the Spaniard perfectly.

Azpilicueta previously featured at either right- or left-back, but has impressed this term as the right-sided centre-back in a three-man defence.

"This system [3-5-2] was in my mind when we planned the season with the club," Conte was quoted as saying by Standard Sport

"We have two systems, 4-2-4 and 3-4-3. When I switched to this system, I felt it was a good fit for our players. We do not lose offensively but we are better defensively.

"We found players not to adapt, but to play in different roles compared to the past. Like Azpi, he is incredible in this new role. He is one of the best in the world in this role."

Victor Moses is another player who has flourished in a new position under Conte and the Italian was equally full of praise for the wing-back.

"Moses too," the Chelsea boss added. "To run for the whole game with this quality is fantastic."