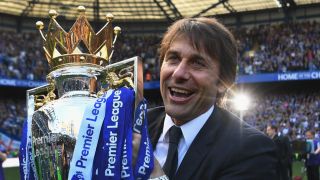 Conte has the chance to complete a domestic double on Saturday when Chelsea face Arsenal in the FA Cup final at Wembley.

Brighton and Hove Albion manager Chris Hughton scooped the Championship award for leading the club into the Premier League for the first time.

The Premier League Manager of the Year sponsored by Barclays is Antonio Conte May 22, 2017