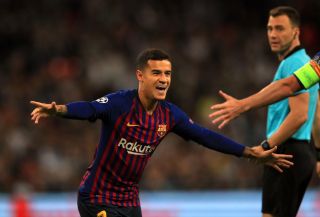 The latter has scored in all competitions for the Bavarians this season and wasted no time in handing his side the advantage with an opening goal after just three minutes.

The early strike was the result of a link-up with Joshua Kimmich, who left his usual right-back role to start in midfield.

A succession of half-chances created the sense that a second goal was looming, but Coutinho narrowly failed to convert an Ivan Perisic free-kick and could only find a post.

The midfield duo, who both joined the reigning Bundesliga champions this summer, joined forces again as Bayern pressed for a wider advantage.

Coutinho fed the ball to Perisic on the perimeter of the box before the Croatian switched feet and tried his luck with a shot on goal.

The resulting attempt curved just wide of the mark, but the threat was enough to jolt Cologne into action.

The Billy Goats’ Jhon Cordoba then found himself unmarked in the box and took his chance to level the scoreline with a strike that swung marginally wide of the target.

Bolstered by the chance, the visitors tried again in the 41st minute.

Austrian midfielder Florian Kainz bid for an equaliser this time, but his attempt was fumbled clear by Manuel Neuer.

As the break approached, Niko Kovac’s side regained control of proceedings as Coutinho surged forward and found Lewandowski.

Untroubled by Cologne’s defensive line and with the keeper on the ground, Lewandowski failed to capitalise on the chance as his shot was chipped over the bar.

He was redeemed almost as soon as the second half began, scoring with a header from another Kimmich assist.

Cologne right-back Kingsley Ehizibue then pulled Coutinho to the floor inside the box, resulting in a red card and a penalty for the home side.

His effort was declared void, however, due to the presence of Bayern players in the box.

The penalty was retaken and the visitors were offered no lifeline as the Brazilian calmly repeated the shot to secure his first goal for the Bavarians.

Lewandowski was then replaced by German forward Thomas Muller, dampening any hopes of the 31-year-old repeating the hat-trick of goals he produced earlier in the season at Schalke.

The scoring was resumed nonetheless, as Coutinho sought out Perisic again and the latter slotted home a fourth goal past Cologne keeper Timo Horn.

Right winger Serge Gnabry then curved a cross into the box, but Perisic was denied a second goal as his headed shot landed just wide.

Reduced to 10 men, Achim Beierlorzer’s side could do little to retaliate and eventually folded 4-0 to the leaders.