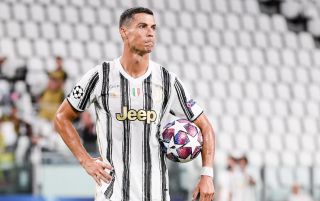 And you thought Jadon Sancho to Manchester United was going to be the transfer of 2020.

Not to be outdone by the suggestions that Lionel Messi could be on his way out at the Camp Nou, perpetual rival Cristiano Ronaldo has now also landed himself a role as the rumour mill's biggest production asset.

According to Italian site Tutto Mercato Web, new Juventus boss Andrea Pirlo is willing to listen to offers for any member of his ageing squad. And in typical breathless style, the football world has noted that none other than Cristiano Ronaldo is an ageing member of the Juventus squad. But surely that would mean...?

Apparently so. The Spanish press has already been reporting that Ronaldo's 'super' agent Jorge Mendes has been hocking his star player around to anyone that will listen, including Real Madrid and, er, Barcelona.

But it is the link with PSG that have caught the eye. Madrid are currently in the process of shifting away from a decade of reliance on the Portuguese forward, while a Barcelona move seems... unlikely.

HEDGE YOUR BETS Get the new PSG home shirt here

Champions League semi-finalists PSG make more sense, though. Not in a purely footballing sense, obviously: they already have Neymar, Kylian Mbappe and Mauro Icardi as their star-studded forward line. But as a transfer, Ronaldo moving to Paris passes the smell test. And with a reported fee of £54m, it wouldn't even break the bank. Not that any transfer would break their bank.

Is it really likely to happen, though? If any new Juve manager could get away with it, it's Pirlo, who will have a greater groundswell of support from fans that Maurizio Sarri. And he announced a "new chapter" at the Old Lady when he took on the role last month.

It seems unlikely PSG would make any sort of push until their Champions League campaign is over – and their strikeforce is one of the few in the world where it's not immediately clear that Ronaldo would improve it. For the time being, we can probably chalk this one up as more rumour than truth.