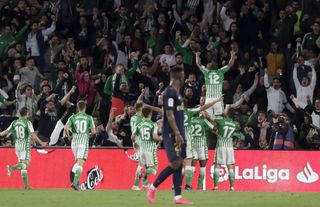 Cristian Tello was the hero as Real Betis beat Real Madrid to deny them the chance to leapfrog Barcelona to the top of the LaLiga table.

Karim Benzema had cancelled out Sidnei’s 40th-minute opener from the penalty spot, but Tello sealed a 2-1 victory with eight minutes remaining to dent Real’s title hopes.

Goals from Unai Lopez and Raul Garcia before the break and Inaki Williams and Inigo Cordoba at the death after Sandro Ramirez had pulled one back saw Athletic Bilbao beat Real Valladolid 4-1 at the Estadio Jose Zorrilla.

A Roberto Torres penalty left 10-men Espanyol rooted to the foot of the table as Osasuna scored the game’s only goal with the visitors’ misery compounded when keeper Diego Lopez was sent off for a second yellow card offence.

However, Oscar Rodriguez’s double boosted Leganes’ survival hopes as they came from behind to win 2-1 at Villarreal.

Gerard Moreno had headed the home side in front with just five minutes gone, but Rodriguez levelled after the break and then won it from the spot after Pau Torres had fouled Roger Assale.

Levante and Granada could not be separated as goals from Roger Marti and Darwin Machis ensured it ended 1-1 at the Estadi Ciutat de Valencia.

In Italy, where games rescheduled from last weekend were played behind closed doors as a result of the coronavirus outbreak, second-half goals from Aaron Ramsey and Paulo Dybala took Juventus back to the top of Serie A courtesy of a 2-0 win over Inter Milan.

Ramsey’s deflected close-range effort handed the home side a 54th-minute lead, and the Wales international then combined with Dybala for him to wrap up the points 13 minutes later.

It proved a good day for the division’s strugglers as goals from Goran Pandev and Francesco Cassata secured a 2-1 victory for Genoa at AC Milan, for whom Zlatan Ibrahimovic struck 13 minutes from time, but to no avail.

Sampdoria got the better of Verona by the same score, although they had to do it the hard way after falling behind to keeper Emil Audero’s own goal, Fabio Quagliarello levelling and then converting an 86th-minute penalty.

Andrea Petagna’s 71st-minute spot-kick was enough to hand lowly SPAL a priceless 1-0 win at Parma in a game which kicked off 75 minutes late as officials debated whether or not the day’s programme should go ahead as a result of the Covid-19 crisis.

Udinese and Fiorentina had to make do with a point apiece after a 0-0 stalemate.

Bundesliga leaders Bayern Munich needed an injury-time strike from substitute Leon Goretzka to cement a 2-0 home victory over Augsburg after Thomas Muller had broken the deadlock eight minutes into the second half.

Adrien Hunou claimed a double as Rennes maintained their bid for a top-three finish in Ligue 1 with a 5-0 rout of Montpellier.

Hunou doubled the early advantage Faitout Maouassa had given their side and after Fabien Tait and Romain Del Castillo’s penalty had put the result beyond doubt, converted a second spot-kick three minutes from time.

Loic Remy ensured Lille remain hot on their heels with the only goal in their home clash with Lyon.

Denis Bouanga’s 68th-minute header, which cancelled out Bordeaux frontman Josh Maja’s strike, ensured St Etienne emerged with a 1-1 draw despite having to play the last quarter of an hour down to 10 men after Mahdi Camara had been dismissed for a second bookable offence.