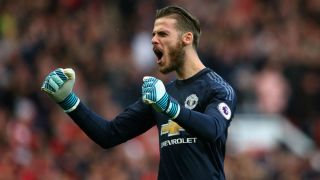 De Gea has established himself as one of the leading goalkeepers in world football since moving to United from Atletico Madrid in 2011.

He almost moved back to the Spanish capital and joined Real Madrid in 2015, with a faulty fax machine infamously cited as the reason for the move breaking down.

The 27-year-old's current deal at Old Trafford runs until 2019, with an option to extend for another year, but Mourinho is looking longer term.

"It's obvious that we're not going to let the option disappear," he told reporters.

"But obviously we are going to try. [Executive vice-chairman] Mr [Ed] Woodward is not on holiday. He barely has holidays. Of course he's going to try to give him a contract that keeps him here for much longer than that option that of course we are going to execute.

"I just trust the board and the work they do. I don't negotiate players, I don't discuss numbers and contracts.

"I just say what is obvious. Any one of you would say the same - David is to keep."

United host Stoke City on Monday, where victory can trim Manchester City's advantage at the summit back to 12 points after the leaders suffered a first Premier League defeat of the season at Liverpool on Sunday.