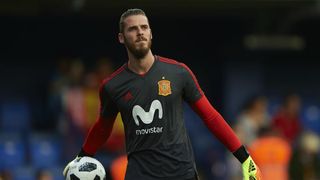 David de Gea may have made a rare mistake in Spain's friendly with Switzerland on Sunday but Vicente del Bosque believes the Manchester United stopper is the "complete goalkeeper".

He was unable to keep Switzerland at bay in Villarreal on Sunday, though, spilling a shot from Stephan Lichtsteiner that allowed Ricardo Rodriguez to earn a 1-1 draw.

Despite that error the 27-year-old will travel to the World Cup as Spain's undisputed number one, and Del Bosque remains a big fan.

"He plays well with his feet, which is important. He is improving and will be better.

"He's been playing for five or six years in Manchester, that's a huge learning experience, same with the national squad."

De Gea and his international team-mates are third favourites to lift a second world title in Russia, something Del Bosque believes is warranted after their unbeaten qualifying campaign.

"Let's see. Spain has done well recently, they did a really good job in the qualifying games with great results, almost a perfect qualification," added the former Real Madrid boss.

"And then we have faced big teams like Germany, France, England, Argentina, Belgium… and we have been better than them. So, that makes me be positive thinking about the future.

"There is not any recipe to play the World Cup. The most important thing is to keep doing what we already have done in the last two years.