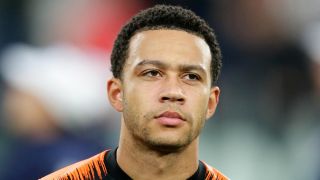 Lyon head coach Bruno Genesio confirmed Memphis Depay will be fined after failing to report for training on the first day of pre-season preparations at the Ligue 1 club.

Depay, who scored 19 goals in 36 league appearances as Lyon finished third in 2017-18, has been linked with a transfer to AC Milan after hitting a rich vein of form in France.

He joined Lyon in January 2017 on a four-and-a-half-year deal after falling out of favour at Manchester United under Jose Mourinho, but his time at Groupama Stadium could be coming to an end.

At his first press conference of the season, Genesio told reporters: "I'm happy to see [the squad] again. One player out of 27 is missing. It's Memphis Depay.

"He will be punished financially when he returns. He had five weeks of vacation like everyone else."