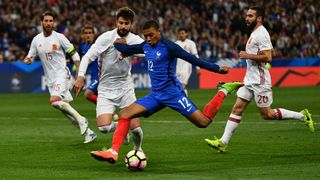 PSG are reported to have agreed an initial loan deal for the 18-year-old striker – one of the hottest properties in world football – with an obligation to buy at the end of this season for €180million.

The transfer would make France international Mbappe the second most expensive player in history after Neymar, who joined PSG from Barcelona for €222m this month.

Mbappe joined up with Deschamps' squad at Clairefontaine for this week's World Cup qualifiers against Netherlands and Luxembourg.

Speaking at a news conference, the former Juventus midfielder took it upon himself to remove most of the remaining question marks over Mbappe's future.

"He's changing club but staying in Ligue 1," said Deschamps, leaving little room for doubt over where Mbappe will be heading.

"The future will say if he's made a good decision."

Before the international break, Deschamps said France players must have their futures in hand, but he has now softened that stance, stating Clairefontaine's facilities could be used for club medicals.

He added: "Players will remain here. [Can they] pass the medical examinations here? Yes, it's possible."

Monaco thrashed Marseille 6-1 on Sunday and are already making plans for life without their star youngster.

Pictures emerged on social media on Monday of Inter forward Stevan Jovetic apparently taking part in a Monaco photoshoot where he was wearing a kit sporting Mbappe's squad number 10.