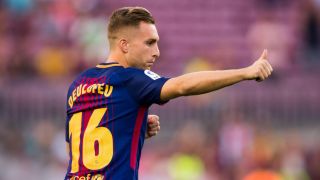 Gerard Deulofeu and Nelson Semedo have both been brought back into the Barcelona squad for Wednesday's Champions League clash with Sporting CP.

The players were rested for Saturday's LaLiga win over Girona but are in Ernesto Valverde's 18-man squad for the trip to Portugal.

However, striker Paco Alcacer has been left out, having not made an appearance for the club since August 28.

There is also no place for midfielder Arda Turan, who recently returned from injury, but goalkeeper Adrian Ortola is back after being given the medical all-clear.

Barca head into the match looking to make it two wins from two in Group D, having beaten Juventus 3-0 at Camp Nou on matchday one.