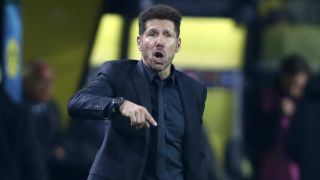 Diego Simeone suffered his heaviest defeat in charge of Atletico Madrid after Borussia Dortmund ran riot in the Champions League on Wednesday.

Axel Witsel's deflected first-half strike and a late double from Raphael Guerreiro either side of substitute Jadon Sancho's tap-in secured the Bundesliga leaders a memorable 4-0 victory at Signal Iduna Park.

The final scoreline marked the widest losing margin former River Plate boss Simeone has suffered in all competitions since his Atleti appointment in December 2011.

A brace of Europa League triumphs and a LaLiga title have come in the following seven years, but a sobering result in Germany presents the club's former midfielder with plenty of questions.

The result was made all the more sensational in view of the 16 clean sheets Atleti had kept in their previous 25 group stage games in the Champions League.

Simeone's men are now three points behind leaders BVB in Group A, although they do still have a five-point cushion to Monaco and Club Brugge.

4 - Atletico de Madrid have suffered their biggest defeat with Diego Simeone as manager in all competitions (4-0 vs Borussia Dortmund). Shock. October 24, 2018