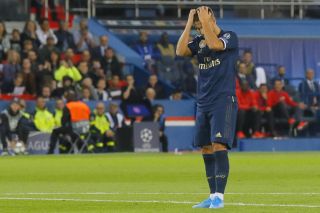 Eden Hazard has insisted he is not yet a Galactico as he attempts to follow in the footsteps of Cristiano Ronaldo.

Hazard is in line to play his first Champions League game for Real at the Bernabeu Stadium against Group A rivals Club Brugge on Tuesday evening confident he can reach the heights he scaled during his seven-year stay at Chelsea once again.

Speaking at the LaLiga side’s pre-match press conference, he said: “I’m not yet a Galactico. I have to be the one to prove that I can become one.

“We know very well the last number seven at this club and I have to be the first to prove that I can be the best in the world, enjoy myself on the pitch, give everything in training and matches.

“I don’t doubt my abilities or my technique and the more I gain confidence, everything will be better.”

Hazard has made only four appearances for the club since his £89million summer arrival, one of them in a 3-0 defeat at Paris St Germain in the opening round of Champions League fixtures, with a thigh injury having delayed his start to the season.

However, coach Zinedine Zidane is confident he will rediscover his best form after initially struggling himself when he joined Juventus in 1996.

Zidane said: “He knows we want more from him, but we have to stay calm. I’m not worried at all. He will succeed here and will be very good.

“You have to be patient with players who have just arrived. The good thing is he will not change. He needs more, but we will see it soon. If we can see it tomorrow, great.

Real Madrid C.F. are 🔝 of #LaLigaSantander!

“The same thing happened to me, but I stayed calm. I knew that in time it would work.”

Real did not make it to the semi-finals for the first time since 2009-10 campaign last season, and have lost three of their last four games in the competition.

They currently top the LaLiga table after seven games, but asked which he would prefer to win, Hazard replied: “Both. When we start a competition, we want to win it: Champions League, league, cup… When you play for Real Madrid, all we want and have in our mind is to win.”

Brugge head into the game having taken a point from their opener at home to Galatasaray and unbeaten in 14 games in all competitions so far this season.

Striker Mbaye Diagne, who scored twice as a substitute in Saturday’s 5-0 league win at Mechelen, told the club’s official website: “That will be an awesome game. Everyone wants to prove himself against Real Madrid. It is a dream to score at the Bernabeu.

“We will play our match there and hope to achieve a good result. They lost at Paris Saint Germain, so everything is possible.”