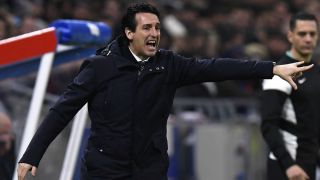 Unai Emery said 10-man Paris Saint-Germain did not deserve to lose against Lyon, believing a draw would have been a fair result for the Ligue 1 leaders.

It was a night to forget for Emery's PSG on Sunday, the French giants upstaged by Memphis Depay's stunning stoppage-time winner in a 2-1 defeat at Groupama Stadium.

Already without Neymar, PSG lost Kylian Mbappe to injury and Dani Alves to a red card in the second half as Depay struck in the 94th minute, cancelling out Layvin Kurzawa's equaliser following Nabil Fekir's second-minuter opener.

Emery lamented the result and red card post-match, which reduced PSG's lead atop the table to eight points after Lyon snapped their six-game winning streak in Ligue 1.

"Both teams gave everything for 90 minutes. Some events were complicated for us, but we were able to overcome them with personality," Emery said.

"We had opportunities and possession of the ball, 1-1, that would have been a fair result.

"We started the second period as we finished the first, with mastery on our part. We did not concede an opportunity, but the expulsion meant that we lost control of this game. The team worked well. We conceded a shot late in the game.

"Lyon have good players, which allowed [Depay] him to score this second goal. It's a bit unfair, but it's football."