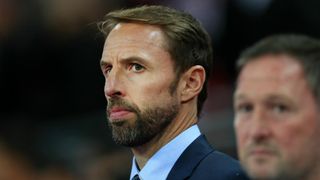 LATEST ODDS ON ENGLAND VS WALES

A friendly game between local rivals England Wales precedes a pair of UEFA Nations League clashes for both over the coming week. England are preparing for Wembley assignments against Belgium and Denmark, while Wales visit Ireland and Bulgaria between now and next Wednesday evening.

Both teams have long since qualified for next summer's Euros, so this will be seen as an early opportunity to tinker with squads and blood a few new faces ahead of a big year.

Southgate's squad includes three debutants in Bakayo Saka, Dominic Calvert-Lewin and Harvey Barnes. All three have started the new Premier League season in blistering form, with Calvert-Lewin worthy of a place in tonight's starting line-up after a number of noteworthy displays for Everton already this campaign.

Wales, meanwhile, have called up Rhys Norrington-Davies and Brennan Johnson, a pair of lower league players who have impressed already this season. Gareth Bale, who has returned to Tottenham Hotspur on loan from Real Madrid this season, misses out through injury.

Wales will need him fit and firing ahead of next summer's tournament, but will use this opportunity to prepare players and formations that don't include the forward.

Wembley plays host to England vs Wales this evening. Expect few fireworks between old foes, but plenty of tactical tinkering ahead of bigger clashes for each.

Kick-off is at 8pm BST and the game is being shown on ITV and SC4 in the UK. See below for watching details where you are.