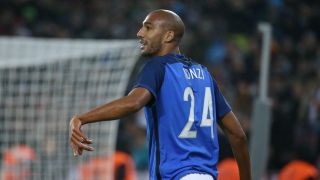 Sam Allardyce would like a reunion with Steven N'Zonzi at Everton but fears there are too many midfielders on the books at Goodison Park to make the deal viable.

Sevilla star N'Zonzi, formerly of Blackburn Rovers and Stoke City, has been heavily linked with a return to the Premier League.

Arsenal are widely viewed as the frontrunners in the pursuit of the 29-year-old Frenchman, although his future could now be complicated by Sevilla sacking head coach Eduardo Berizzo.

Allardyce has enjoyed an impressive start to life at Everton, where four wins and draw from his five matches at the helm have seen relegation fears swiftly disappear from view.

He still wants to tweak the squad at his disposal during the January transfer window but a midfielder such as N'Zonzi, who he coached at Blackburn, is not the priority at this stage.

"I'd be very interested in Steven but if you have a look at how many footballers there are at the club, then it is impossible for me to block that up even more," Allardyce told reporters.

"We would be better served in other areas - like another goalscorer, maybe a full-back. After that who knows.