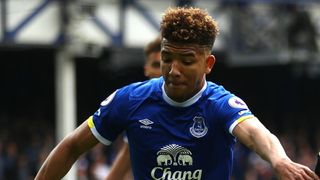 Everton have rewarded Dominic Calvert-Lewin for his progress during his first season at the club by handing him a new five-year contract.

The Premier League side announced on Wednesday that fresh terms have been agreed with the 20-year-old, keeping him at Goodison Park until 2022.

Calvert-Lewin only joined Everton from Sheffield United in a reported £1.5million deal last August and has broken into the first-team squad since making his debut in December, making 10 Premier League appearances.

"I hadn't expected things to move as fast as they have and to have played against the teams I have done, so I'm very grateful for that and I'm working hard every day to improve," Calvert-Lewin told Everton's website.

"I'm learning every day in training and in the games, so I can't ask for much more.

"It only feels like yesterday when I was signing for Everton, so to be here now is a great feeling."

Calvert-Lewin added: "My leap into the first-team was a bit quicker than expected and I have played a few games now. I came in with the Under-23s initially and I'm now really enjoying being part of the first-team squad.

"Around Christmas I got my chance with the first-team, got on the bench and made my debut. It has taken off from there and I have tried to take it in my stride day-by-day.

"I'm really grateful for the opportunities I have had since joining the Club and I am really looking forward to continuing my development as a player here.