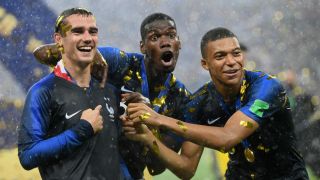 Didier Deschamps and his France players were splashed across the front page of every newspaper on the morning after Les Bleus beat Croatia 4-2 in the World Cup final in Moscow as journalists expressed joy and disbelief at the victory.

When Ivan Perisic scored after 28 minutes to level the scores at 1-1, Croatia looked in control of the game and favourites to go on and seal victory, but then France won a hotly debated penalty, scored by Antoine Griezmann, and the rest is history.

There was a startled air to the headlines that greeted the country's first triumph since Deschamps lifted the trophy as a player in 1998, perhaps reflecting the sense that Les Bleus failed to deliver the quality of football they are capable of with any consistency.

Charente Libre's front-page splash ran the headline "A crazy thing", while Courier Picard similarly led with "It's crazy" and L'Ardennais had a picture of Hugo Lloris lifting the trophy alongside the phrase "Sacre bleu!".

Other publications focussed on the strength of feeling that has spread across the nation for Deschamps' youthful squad, which stars young player of the tournament Kylian Mbappe.

Daily newspaper Liberation led its front page with the simple headline "ENCORE!", hinting at the potential for Mbappe and his team-mates to achieve that which eluded France's World Cup winners of '98 – a second triumph.

Le Parisien's front page said "Head in the stars" and featured a picture in which Mbappe's eyes are fixed on the trophy, hinting at the bright future awaiting Paris Saint-Germain's dynamic forward.

Other publications paid tribute to Deschamps, with L'Union leading its front page with the headline "Thank you boss" along with a picture of France's players holding the 49-year-old aloft in celebration.

The media's adulation is in stark contrast to the two years of criticism that followed France's 1-0 defeat to Portugal in the European Championship final and Deschamps will hope his side's achievements in Russia will buy him some time as he seeks to help his players fulfil their potential.