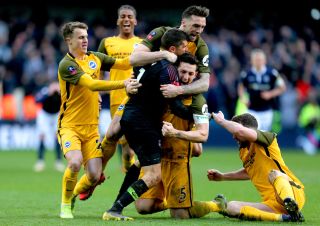 The FA Cup reaches the semi-final stage this weekend with Brighton facing the daunting task of dumping red-hot favourites Manchester City out of the competition to meet either Watford or Wolves in the final.

Here, Press Association Sport takes a look back at some of the key moments which have helped to decide classic last-four encounters in the past.

Ryan Giggs left Manchester United fans with a treasure trove of memories when he finally hung up his boots, but few more sensational than the goal which secured the club’s place in the 1999 FA Cup final. With Dennis Bergkamp, who later missed a penalty, having cancelled out David Beckham’s opener in a replay at Villa Park, Giggs set off on an extra-time run which saw him skip away from four defenders before smashing an unstoppable shot past David Seaman.

Then third-tier Chesterfield looked to be heading for a fairytale trip to Wembley when, with Middlesbrough’s Vladimir Kinder having been sent off, they took a 2-0 lead at Old Trafford through Andy Morris and Sean Dyche’s penalty with an hour played. However, Fabrizio Ravanelli and Craig Hignett’s spot-kick levelled the scores, although the Spireites’ Jonathan Howard had seen a legitimate goal disallowed in the meantime. Gianluca Festa looked to have won it for Boro in extra time, but Jamie Hewitt’s last-gasp equaliser secured a replay in which the Teessiders triumphed 3-0.

The Steel City decamped en masse to Wembley on April 3, 1993 and it was the Owls’ fans who were celebrating when Chris Waddle opened the scoring with a stunning free-kick. Alan Cork’s equaliser dented their joy only briefly before Mark Bright snatched an extra-time winner. Wednesday returned to Wembley on three occasions that season, losing the League Cup final and drawing the FA Cup final before succumbing in the replay, all to Arsenal.

Paul Gascoigne’s thunderous free-kick lit up another Wembley semi-final and his strike and two more from Gary Lineker eclipsed Alan Smith’s effort. Gascoigne drilled the ball beyond astonished England team-mate David Seaman and into the top corner to set Spurs on their way, although his final would end in agony after he suffered a cruciate ligament injury against Nottingham Forest.

Few gave Crystal Palace, who had lost 9-0 at Liverpool in the league seven months earlier, much chance of getting past them in the cup, but goals from Mark Bright and Gary O’Reilly had cancelled out Ian Rush’s opener before Steve McMahon and John Barnes from the penalty spot seemingly restored order. However, Andy Gray’s 88th-minute equaliser took the tie into extra time, during which Alan Pardew fired the Eagles to a shock victory.

When David Rennie gave Leeds an early lead at Hillsborough, there was little warning of the drama which was to follow. Goals from substitute Micky Gynn and Keith Houchen turned the game around only for Keith Edwards to level and set the stage for Dave Bennett to send Coventry through with an extra-time winner.