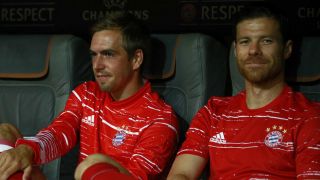 Pep Guardiola hopes Philipp Lahm and Xabi Alonso remain in football after bringing down the curtain on their glittering playing careers with Bayern Munich this weekend.

Lahm and Alonso will play professionally for the final time when the Bundesliga champions host Freiburg.

Guardiola led Lahm for three seasons between 2013 and 2016 and brought Alonso to Bavaria from Real Madrid at the end of his first season in charge.

Speaking ahead of Manchester City's final match of the Premier League season at Watford, Guardiola hailed two men he views as "exceptional in all terms", while he has no doubt Alonso – a 2010 World Cup winner with Spain – will follow him into the dugout.

"Philipp, it will be a surprise if he becomes a coach. When we spoke about that when we were together he said, 'no way'," he said.

"But when I was a football player a lot of my team-mates said the same and after they are a coach.

"In another role, hopefully Philipp will stay in world football because we need him. He's so good in all the terms

"Xabi will definitely be a coach. They are so intelligent. They will do what they believe, that is the most important thing

"Both have a lot of personality. They are exceptional in all terms – as human beings, as team-mates as football players. You cannot imagine how good.

"Hopefully they can enjoy the last day in the Allianz Arena with their fans. They have to be so proud of what they have done."

Guardiola added: "They both helped me a lot in our period working together. They always had curiosity about which team we are going to face, how we are going to play and what they have to do.

"I was a lucky, lucky guy to have those two guys with me in that period in Germany. All the best in their lives, their careers and hopefully they can come back soon in football."

Steven Gerrard established a formidable midfield partnership with Alonso during their time together at Liverpool and the ex-England captain sent a video message to Bayern for the 35-year-old.

"I just want to say a huge congratulations on your retirement," said Gerrard, who retired last year following an 18-month stint with LA Galaxy. "What a special career, a fantastic player.

"The best passer of a ball I've ever played with and you deserve all the accolades you get, mate. What a special career for club and country.

"I couldn't ask for a better midfield partner and when you left, it broke my heart. You'll always have a special place at this football club [Liverpool] and you're always welcome to come and visit."