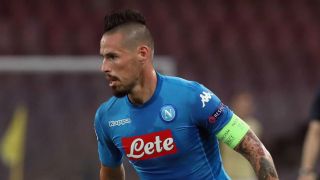 The Slovakian midfielder sits on 114 goals for Napoli – one shy of the Argentinian great's haul of 115 from his celebrated spell in Naples that inspired Serie A glory in 1986-87 and 1989-90.

Maurizio Sarri's team sit top of the table in the Italian top flight with a 100 per cent record from eight matches this term but face a tough task in Manchester against Pep Guardiola's free-scoring Premier League leaders.

Napoli are three points behind City in Group F, having lost their opening round-robin game to Shakhtar Donetsk and Hamsik told a pre-match news conference that his priorities are clear.

"It would be great to score tomorrow and to equal Maradona's scoring record," he said before a match where he could line up against Sergio Aguero – the City striker who is coincidentally a solitary goal away from matching his own club's all-time mark of 177 set by Eric Brook.

"But the most important thing for me is the team and the performance of my team.

"Of course, I will be happy if I score but all we want is to leave the stadium with points."

: "I'd like to overtake Maradona tomorrow, but this is less important. The main thing is the result for the team" October 16, 2017

Hamsik is one of the few survivors on either side from when Napoli were the visitors on City's debut Champions League appearance in September 2011.

An Aleksandar Kolarov free-kick for the hosts cancelled out Edinson Cavani's opener on that occasion, with elements of City's performance under Roberto Mancini afflicted by stage fright.

Hamsik, 30, believes the Premier League side have grown considerably since those tentative first steps on Europe's big stage but feels Napoli's feat in continuing to achieve in spite of stars such as Cavani, Ezequiel Lavezzi and Gonzalo Higuain heading for the exit door is worthy of greater plaudits.

"It's great to be back here to play one of the strongest teams in Europe," he said. "Six years ago, Manchester City were not at this level but have grown a lot.

"But I would say Napoli have grown more than Manchester City. We always want to do better.

"This Napoli are playing very well. It’s the best Napoli team I’ve ever played in."