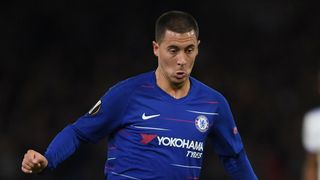 Eden Hazard will sit out Chelsea's EFL Cup fourth-round match against Derby County but could return against Crystal Palace on Sunday.

Belgium international Hazard missed the Europa League victory over BATE and the Premier League win against Burnley due to a back injury.

Chelsea assistant coach Gianfranco Zola expects the 27-year-old to return to full training this week, potentially making him an option for the visit of the Eagles.

"He's certainly much better. Not sure today [Tuesday], maybe tomorrow he's going to join us in training," said Zola, who also suggested Pedro and Olivier Giroud will miss out.

"I don't think he's going to be involved in the game [against Derby], but he's looking quite good for the weekend. We are pleased because he's such an important player for us.

"Pedro has had a stomach ache. He came off on Sunday. He was getting better, but there is still a little problem. We can assess him tomorrow.

"Also Olivier Giroud he has a little fatigue problem with one of the legs. We're going to assess him tomorrow as well.

"[Ethan] Amapdu has been back in training. We're going to decide whether he's going to be part of the team."

The meeting with Derby will see Chelsea's all-time leading goalscorer Frank Lampard return to the Stamford Bridge in the opposition dugout.

Zola had no doubt Lampard would be a successful manager, with Derby having knocked Manchester United out in the previous round and sitting sixth in the Championship.

"He's a legend of the club. He's done so much for the club. We really wish him continuously well as a coach," said Zola.

"It's not a surprise for me he's doing well and he's going to do well in the new role in football. He's always had a great attitude towards the game, towards what has to be done to become good in the game."

Chelsea loanees Mason Mount and Fikayo Tomori could line up for Derby at Stamford Bridge and Zola would be keen to see the former in action, having rated him highly upon being appointed as Sarri's assistant.

He said: "I came across him when I first came here. I was analysing the players we had on loan. He was one of the first players I analysed. And I said: 'This player is for us.'

"This was the plan, to keep him at least for pre-season with us. But then an opportunity to send him to play in England in such a competitive league like the Championship came and the club decided it was good for him.

"I like him very much, because he's one of those players that has the mental speed to work out things very quickly. You can see that in the way he plays.

"Physically he has to improve. The Premier League is a different level. But he's getting on very well. I'm pleased for him.

"I'm sure he'll be up for it and it will be important to get even more indications for us."