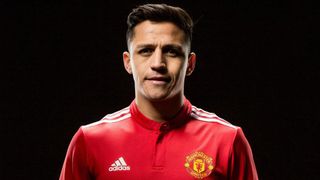 The Alexis Sanchez transfer saga is finally over - now Manchester United must work out how to get the best out of their latest recruit.

The Chile forward's move to Old Trafford was officially confirmed on Monday, with Henrikh Mkhitaryan moving in the opposite direction to Arsenal. In completing the deal, the two players get the chance to enjoy fresh starts in new surroundings.

But how does Sanchez compare to the rest of the attacking options in Jose Mourinho's star-studded squad?

This is the key statistic for any front player. Goals win games, create reputations and leave lasting memories on fanbases.

Sanchez scored 60 of them for the Gunners following his arrival from Barcelona in 2014, averaging one every 169 minutes. Those numbers are comfortably better than the goal-shy Mkhitaryan, who managed just five in 2,280 minutes on the pitch for United.

In comparison to the current squad, though, only Lukaku (96) has found the net more than Sanchez in the English top-flight. The Belgium international scores every 167 minutes, and that is taking into account his time at Everton.

The best of the lot, however, is Ibrahimovic, a somewhat forgotten figure in Manchester these days after enjoying an outstanding debut campaign in England. The experienced Swede has failed to register a goal in five appearances this season, albeit he has been badly hampered by injuries, but he has still netted every 149 minutes in his Premier League career.

So Sanchez's goals tally stands up well, but let's dig a little deeper under the surface. Any forward player turning out for a top-six team in the Premier League will expect to get chances during a game - the key is taking them when they eventually come your way.

This is where United's acquisition lags behind some of his new colleagues. Sanchez has fired in an exceedingly high 426 shots (which includes those blocked) and has a conversion rate of 14.08 per cent. That's better than Lingard (12.12) and Rashford (13.08), albeit the England internationals have had far fewer efforts (99 and 107 respectively) so have a smaller sample size for comparison purposes.

Mata - who has a conversion rate of 14.77, an impressive figure for someone often lining up in a deeper role - and Lukaku (15.87) are ahead of Sanchez, yet they still both lag some way behind the dead-eyed Martial.

The Frenchman - who regularly lines up on the left side of a front three for Mourinho, a role Sanchez could be set to fill in the future - finds the net with 17.91 per cent of his attempts.

Forwards tend to be selfish types. If you're judged mainly on how many times you score, you need to have a ruthless streak.

Yet creating for others is still a pivotal part of the job, and Sanchez demonstrated at Arsenal how he can contribute to the team's cause. He set up 25 goals and created 272 chances for others during his time with the London club.

It will hardly come as a surprise to find out Mata tops the charts. The Spaniard's 46 assists puts him comfortably ahead of nearest rival Lukaku (33), who has demonstrated he can be an effective creator in the English game while playing a lone role as his team's central striker.

9 - Only Paul Pogba (9) has more Premier League assists for Man Utd than Henrikh Mkhitaryan this season, despite the Armenian starting just two games since the end of October. Delivered. January 22, 2018

Here's another category where Mata takes top spot. The former Chelsea player has made 9,754 passes in his Premier League career to date - and is accurate with an outrageously good 87.89 per cent of them.

Mkhitaryan (83.44) is third behind Lingard (86.59), with the rest of the striking options all in the 70s. Sanchez sits comfortably in the middle of the pack, having completed 4,110 of his 5,418 pass attempts for the Gunners.

Lukaku has the worst pass completion rate (70.16 per cent) out of this group, with the Belgian also averaging the lowest number of touches.

His tally of 42.44 per 90 minutes is comfortably below Sanchez's mark of 74.46, with only Mkhitaryan (74.61) averaging more than the man he will now try to replace at the Emirates Stadium.