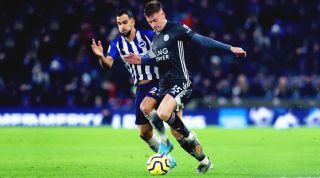 Brighton and Hove Albion made the perfect return to the Premier League on Saturday afternoon.

Having failed to win a single match in 2020, the Seagulls turned around a 1-0 deficit at home to Arsenal to win the game 2-1 in the dying embers. Neal Maupay popped up with the winner, which gave Graham Potter's men a famous victory, a double over the Gunners and most importantly, a little breathing space from the relegation zone.

Brighton's next match might prove a sterner test. Leicester City could only muster a point away to Watford in Saturday's early kick-off but the Foxes have been in fine fettle all season, pushing for Champions League places. The home advantage of a rocking King Power Stadium might not be in Leicester's favour but the firepower of Jamie Vardy, James Maddison and friends most certainly is.

Only Manchester City and Liverpool have a better goal difference than Leicester. Brighton need to be at their best to get something from the clash...

If you’re on holiday or just simply out of the country, your domestic on-demand services won’t work – the broadcaster knows exactly where you are from your IP address. Your access to the game will be automatically blocked, which is annoying if you’ve paid a subscription fee and don't want to use an illegal, buffering stream that makes you miss another Jamie Vardy party. And that's where we recommend ExpressVPN (more on which below).