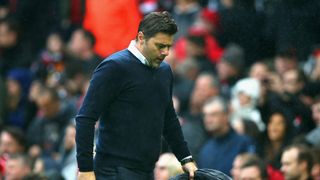 Mauricio Pochettino refused to blame the absence of Harry Kane after Tottenham were held at arm's length by Manchester United before Anthony Martial snatched a 1-0 win.

A hamstring injury kept Kane out of the trip to Old Trafford, with Pochettino selecting Son Heung-min in attack rather than Fernando Llorente.

Spurs made good progress in wide areas in the first half, where they lacked Llorente's physicality, and then seemingly abandoned the tactic once the Spaniard was brought on in place of Son just after the hour.

Asked if his side missed Kane, Pochettino told Sky Sports: "If Dele Alli had scored now the question would be different.

Mauricio: "I feel disappointed because the game was even, the performance was good and the effort was fantastic. We must keep going." October 28, 2017

"It is always about the result. You are always going to miss your main striker but it is not fair to talk about Harry Kane.

Martial burst clear of Eric Dier to slam home Romelu Lukaku's flick-on, the lapse in defence frustrating Pochettino, who felt a draw would have been fair.

"It was a good game and a shame to lose it," he said. "There were chances for both sides, it was a very tough game. I think a draw would have been fantastic and I feel proud for the players and team.

"We were unlucky in the last 10 minutes. Okay it was our mistake but we fought a lot and deserved more.

"Of course, it is annoying [to lose to such a mistake]. It is important to be calm. These types of mistakes happen. Now is not the time to blame. We must fix it and move on. We cannot change the result.

"When we concede we are very disappointed - all of the players too. Until that moment the game was more on our side than their side. On Wednesday [against Real Madrid] we have another game so we cannot think too much on the mistake."