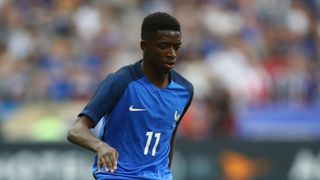 Didier Deschamps has warned Ousmane Dembele that he must improve his attitude if he is to get back on track at Barcelona.

The 21-year-old was not in the squad for Barca's shock 4-3 defeat to Real Betis at Camp Nou on Sunday.

His omission came amid reports in Spain that Barca were unhappy with the way Dembele informed them he was unwell to train on Thursday, while it is also claimed there have been several instances of the winger breaking club rules.

Despite his domestic woes, Deschamps has named Dembele in his squad for the Nations League clash with Netherlands on Friday and a friendly match with Uruguay four days later.

The World Cup-winning boss says it is nothing new for Dembele to be late for training, but has warned him that he needs to change his ways if he is to carve out a successful career at the top.

"I haven't talk with the staff of Barcelona because I don't interfere in the daily business of clubs," he told a media conference.

"It's their responsibility and it's up to them to manage their players, on and off the field.

"Ousmane has been with us for a while. That's his usual trick to be late, but in his defence, I'm sure he'll say: 'I'm not the only one.'

"Whether at a big club like Barcelona, in the French national team or elsewhere, he has to pay attention to that.

"It's part of the life and requirements of a professional footballer.

"He must improve to prevent it from becoming negative. These are situations that can be repeated. The sooner he understands that, the better for everyone."