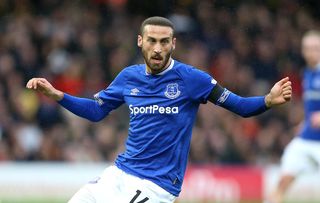 Crystal Palace will be without captain Luka Milivojevic and several other players for the visit of Arsenal, but new loan signing Cenk Tosun is available after being registered in time following his arrival from Everton on Friday.

The club did appeal against Milivojevic’s red card in the 1-0 home FA Cup defeat to Derby, but the decision was upheld and he will miss the next three Premier League games.

Hector Bellerin could return for Arsenal with the right-back facing a late fitness test on a hamstring injury.

The Spain international has missed the last eight games but is in contention to make his comeback in south London, although fellow defenders Kieran Tierney (shoulder) and Calum Chambers (knee) are missing.

Head coach Mikel Arteta is expected to recall the likes of Bernd Leno, Lucas Torreira and Pierre-Emerick Aubameyang after they were rested for Monday’s FA Cup win over Leeds.