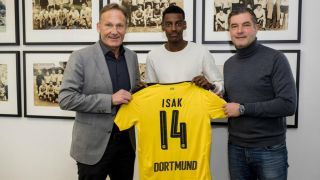 The sanction comes after the Swedish Football Association (SvFF) found the Allsvenskan outfit to be in breach of its rules relating to intermediaries and their role in the transfer of players under the age of 18.

Seventeen-year-old Isak moved to Dortmund on a long-term contract in January, signing for an undisclosed fee that was said to have broken the record for a player from the Swedish top flight.

He had also reportedly previously turned down a move to Real Madrid.

Isak has drawn comparisons to Sweden icon Zlatan Ibrahimovic and made his international debut in January against Ivory Coast.

He then became the youngest goalscorer in Sweden's history on his second appearance, netting against Slovakia.