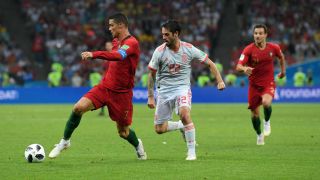 Isco joked he will not speak to Real Madrid team-mate Cristiano Ronaldo again after the Portugal star's hat-trick denied Spain an opening win at the FIFA World Cup.

Ronaldo curled in a stunning free-kick to earn a share of the spoils for Portugal from the Group B clash with their Iberian neighbours in Sochi on Friday.

A brace from Diego Costa and a stunning Nacho volley previously looked to have been enough to earn Spain the points despite Ronaldo's early penalty and a 44th-minute strike, which was aided by a dreadful error from goalkeeper David de Gea.

Asked about his club-mate's performance by El Larguero, Isco said: "Don't talk to me about Cristiano! I'm not going to speak to him again after what he did the other day...

"He doesn't have a high strike rate, but when he has his day… his first two goals gave him confidence and got him looking for a hat-trick."

When the topic turned to De Gea's mood in the wake of his mistake, Isco added: "He has a great deal of experience, he's one of the best keepers in the world.

"These things happen and especially to goalkeepers because if a striker makes a mistake it doesn't matter but if a keeper does, it tends to get magnified.

"I've known David for years, he's happy, focused, feeling confident and he has the support of the whole squad."

Spain were not the only pre-tournament favourite to suffer disappointment in their opening game. Germany were stunningly beaten by Mexico while Brazil and Argentina were held to draws by Switzerland and Iceland respectively.

"At the World Cup, everything is complicated. You have to put in 200 per cent in every game and even if you do, that won't guarantee you'll win," said Isco. "All of the teams are very motivated, there are some very strong teams and it's just very, very difficult."