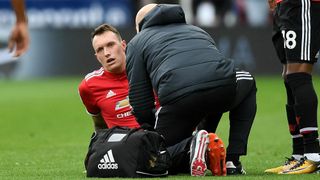 Jones limped off with an apparent thigh injury in United's shock 2-1 defeat at newly-promoted Huddersfield Town last week but the Englishman was on the bench for Tuesday's 2-0 EFL Cup victory over Swansea City.

And Mourinho said Jones – who has not missed a Premier League match this season – is in line to take on visiting Spurs, who are level on points with second-placed United.

"It was quite comfortable and no injuries," said Mourinho. "So a good day for us.

"I think Jones will be [back] because, today [Tuesday], he was on the bench and he told me he will be ready in case I need him. So I believe he'll be even better for Saturday.

"Apart from that, I have no news and no hopes [for any other players]."

"We were always in control. I'm pleased with the performances of the team and individuals."More from the boss: October 24, 2017

United and Tottenham are level on 20 points after nine matches, five points adrift of Manchester City.