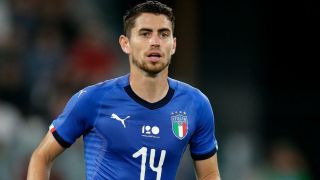 Reported Manchester City target Jorginho has not been included in Napoli's squad for pre-season, as his likely move to the Premier League champions edges closer.

Napoli president Aurelio De Laurentiis claimed in June that the Serie A club had turned down a €50million bid from City for the midfielder, but Pep Guardiola's side were expected to return with an improved offer.

And the drawn-out negotiations now appear to be nearing a conclusion, with Napoli confirming on Monday that the Brazil-born Italy international had not joined the squad for their pre-season training camp in Dimaro Folgarida.