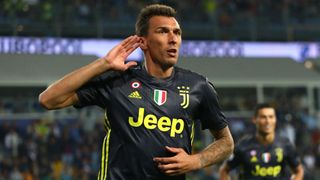 Juventus will welcome back striker Mario Mandzukic for the Champions League clash with Manchester United, but Blaise Matuidi remains in doubt.

Massimiliano Allegri confirmed the experienced Mandzukic, who missed the 1-0 win at Old Trafford, was ready to return from an ankle problem.

The 32-year-old has been absent from each of his team's last three matches as Juve have opened up a six-point lead in Serie A over nearest rivals Inter.

Sami Khedira is also available to feature against United in Turin after watching the weekend victory over Cagliari from the bench, while a decision is still to be made over fellow midfielder Matuidi.

"Mandzukic is fine," Allegri said. "He's an important player for us. Having him available is key.

"I'm not sure whether to rest Matuidi or not. He is a player who plays with heart even when he isn't in the best condition.

"Khedira is in good shape. The only players out are Douglas Costa, Federico Bernardeschi, Emre Can and Moise Kean."

: "I'm sure that will play. He has more or less only played one game so far and he managed to get an assist. I hope that he will score tomorrow."November 6, 2018

Juve can confirm their progression as Group H winners with a victory at the Allianz Stadium on Wednesday.

The Italian champions were rarely troubled in the reverse fixture and United boss Jose Mourinho was full of praise for Leonardo Bonucci and Giorgio Chiellini after that match.

While his team remains unbeaten in all competitions this season, Allegri expects his defenders to face a tough examination.

"We have to do better than we did in Manchester," the Bianconeri boss said.

"They are a team that can be dangerous at any point in the match. They have great pace with Marcus Rashford, Anthony Martial and Alexis Sanchez.

"Right now things are going well. We could reach our first objective, qualification for the next round of the Champions League.

"What matters most is getting to March in good shape and competing on all fronts."