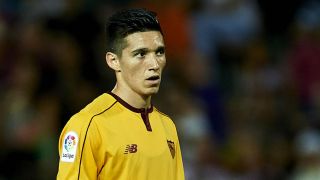 The 24-year-old joined Atleti from River Plate for a reported €8million in August 2015 and made 11 appearances in all competitions during the second half of that season, having remained with River until the conclusion of the Club World Cup.

He was loaned out to Sevilla last season, where he made 32 outings, but has been deemed surplus to requirements by Atleti ahead of the 2017-18 campaign.

"From Atletico de Madrid we thank him for the effort he made during the time that he had defended our colours and wish him the best luck in this new phase," read a club statement.

Meanwhile, Rafael Santos Borre has also been offloaded, the Colombian striker heading to River after spending his only season in Spain on loan at Villarreal.