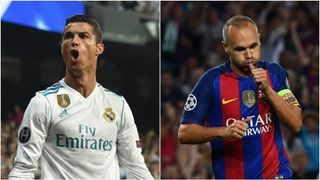 The new LaLiga season starts this weekend but Barcelona and Real Madrid still have work to do in the transfer market before the big kick-off.

Barca and Madrid have lost much-loved club icons, with Cristiano Ronaldo departing the capital after a hugely successful nine-year spell and Andres Iniesta leaving the Catalan giants for a new chapter in his career in Japan.

Ernesto Valverde's side won the double last season and, on paper, seem to have strengthened more than Madrid, who have strenuously denied they will move for either of Paris Saint-Germain's superstars Neymar and Kylian Mbappe.

The deadline may be just over two weeks away, but how are Barca and Madrid shaping up in terms of transfers ahead of the new season?

Barca face the fresh campaign without one of their most iconic players, Iniesta having opted to head for Vissel Kobe to end a career-long association with the club.

Iniesta's influence waned with his advancing age, but the 34-year-old still started 25 LaLiga games last season and starred in a 5-0 demolition of Sevilla in the Copa del Rey final.

Barca bought the man many assume to be Iniesta's successor in January and Philippe Coutinho - who was cup-tied for the Champions League last season - should be increasingly important.

Coutinho's ability to play either in midfield or attack gives Valverde tactical flexibility and the former Liverpool man seems to have a strong understanding with Lionel Messi, who starts 2018-19 on the back of more international disappointment with Argentina.

The attack has also been freshened up with the signing of young Brazilian winger Malcom from Bordeaux, with his arrival providing greater competition for Ousmane Dembele after a maiden season heavily interrupted by injuries.

Clement Lenglet adds defensive cover - Barca have allowed Aleix Vidal and Lucas Digne to leave, trimming their squad - but the most important addition might just be Arthur.

Gremio were determined to hold on to the 22-year-old until December but Barca were able to prise the uncapped Brazilian midfielder away and his pre-season performances have already drawn comparisons to Xavi.

Arturo Vidal is a direct replacement for Paulinho after the midfielder re-joined Chinese Super League side Guangzhou Evergrande after a single season with Barca, and the Chile international arguably represents an upgrade.

But Valverde remains keen on a further midfield signing, with seemingly unsettled Manchester United midfielder Paul Pogba said to be a top target. However, Ivan Rakitic may have to take up reported interest from Bayern Munich or PSG to facilitate a big-money move for the World Cup winner.

good luck for your new adventure in Japan with ! We are sure the fans will enjoy your magicWe will follow you via Barça and ! May 24, 2018

Selling a 33-year-old for a profit on the world-record fee paid for him nine years ago is remarkable business from Madrid, but how they intend to replace Ronaldo's goals and unerring ability to deliver in the biggest games remains to be seen.

Madrid have been heavily linked with Neymar and Mbappe - despite the club rejecting the speculation - while Chelsea's Eden Hazard is another name that refuses to go away. However, it seems unlikely the Blues would let the Belgium international go with the Premier League transfer window already closed.

May's Champions League final hero Gareth Bale and Marco Asensio are primed to take more important roles in Ronaldo's absence, while Vinicius Junior could be a star of the future.

Julen Lopetegui will have essentially the same players that Zinedine Zidane led to three consecutive Champions League crowns, and although there is an upgrade in goal with Thibaut Courtois brought in from Chelsea his squad needs reinvigorating.

Madrid will likely spend again before the transfer window closes but they might have to fight off interest from another Serie A giant in one of their key players.

Luka Modric, winner of the Golden Ball at the World Cup, is being chased by Inter and is said to want to join Croatia team-mates Marcelo Brozovic, Ivan Perisic and Sime Vrsaljko in Italy.

Ivan Perisic suggested there was someone missing from a photo with fellow Croatians Marcelo Brozovic and Sime Vrsaljko at Inter...And Luka Modric just so happened to like the post on Instagram!CC: ivanperisic444 August 10, 2018

Miralem Pjanic and Thiago Alcantara have thus been linked as midfield reinforcements, something they are already in need of with Mateo Kovacic sent on loan to Chelsea to grease the wheels for Courtois' move to Los Blancos.

Lopetegui will put faith in Spain star Isco but it is hard to see how Madrid will close the 17-point chasm they trailed Barca by in the 2017-18 season without further business.