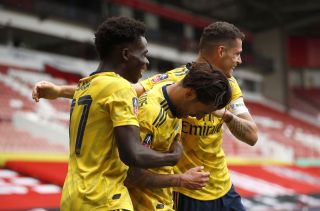 Arsenal reached their first domestic semi-final of the post-Arsene Wenger era as Sheffield United’s slump continued in the FA Cup with a 2-1 away win at Bramall Lane.

Prior to the curtailment of football due to the coronavirus pandemic, the Blades may have been favourites to progress but they have been surprisingly poor since the resumption, now losing three of their four matches in all competitions.

Nicolas Pepe’s first-half penalty looked like it would be all that separated the sides but late drama saw David McGoldrick equalise, before substitute Dani Ceballos won it for the Gunners in injury time.

It saw Arsenal make a domestic cup semi-final for the first time since Wenger left the club in 2018 and keeps alive arguably the Gunners’ best chance of European football next season, with their Premier League form suffering.

For Chris Wilder’s men, their campaign is threatening to fizzle out following much promise before the lockdown.

After a slow start to the match, the Blades thought they had taken the lead after eight minutes following a period of pressure which yielded two corners.

John Lundstram headed into the net from virtually on the goal-line from the second of those corners after Oli McBurnie had nodded the ball back across goal but VAR correctly ruled it out for offside.

Shortly afterwards, another set-piece caused panic in the Arsenal box. A long, flat throw-in from Jack Robinson was flicked on by McBurnie and McGoldrick was inches away from turning the ball in at the far post.

Arsenal finally grew into the tie but it was still against the run of play when they took the lead midway through the first half.

Chris Basham needlessly went through the back of Alexandre Lacazette in trying to pinch the ball from the Gunners striker just inside the area and Pepe made no mistake with the resulting penalty, firing his spot-kick hard into the bottom corner of the net.

It was the forward’s eighth goal of the season since his £72million arrival at the club last summer.

Pedestrian and ponderous in their build-up play prior to the goal, Arsenal’s tails were now up and only a fine one-handed save from Dean Henderson, getting down to his left by the post, denied Pepe a second goal of the afternoon.

Oliver Norwood worked Emiliano Martinez just before half-time with a curling 20-yard effort, which the goalkeeper held well, before Pepe went close again, steering the ball wide from Kieran Tierney’s cut-back down the left side of the area.

56' Egan has the ball in the Arsenal net but it's ruled out for offside.— Sheffield United (@SheffieldUnited) June 28, 2020

The Blades regrouped at the break and began the second half well. Henderson’s wind-assisted goal kick almost embarrassed Martinez who, backpedalling frantically, had to help the ball over the crossbar, before the hosts had another goal ruled out for offside by VAR.

On the hour mark, a wonderful cross from Robinson on the left was headed wide by Basham at the far post from six yards out.

Wilder’s side were not lacking endeavour or effort but that little bit of quality in the final third of the pitch eluded them as they were unable to turn their second-half dominance into a goal.

However, they made the breakthrough their performance deserved with three minutes remaining as McGoldrick turned the ball home following another long throw.

The Blades’ first goal since football resumed looked like taking the tie into extra time but Ceballos rolled his shot beneath Henderson from a tight angle to send Arsenal through.