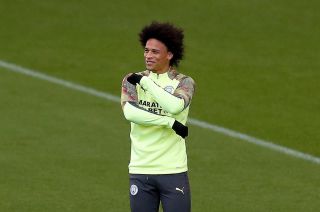 Leroy Sane played 57 minutes as he stepped up his return from injury with a run-out for Manchester City’s under-23 side.

The Germany winger has not played since suffering a knee ligament injury in the Community Shield against Liverpool at Wembley last August.

The 24-year-old, who was PFA Young Player of the Year in City’s 2017-18 Premier League-winning campaign, returned to training last month.

He played his first match since on Friday night as City’s Elite Development Squad faced Arsenal at the Emirates Stadium in Premier League 2.

City won 4-2 with Sane playing in his preferred role on the left flank before being replaced by Liam Delap. Adrian Bernabe scored a brace for City with the visitors’ other goals coming from Taylor Harwood-Bellis and Jayden Braaf.