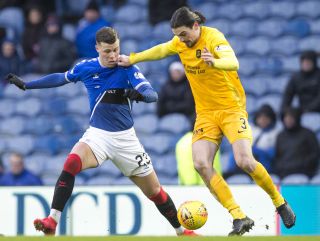 The centre-back went off with a leg strain at Motherwell on Wednesday.

Goalkeeper Robby McCrorie will not be able to face his parent club so Max Stryjek is in line for a debut.

Defender Leon Balogun will miss out for Rangers after picking up a quad injury.

Striker Kemar Roofe made his debut against St Johnstone on Wednesday night but is likely to start again on the bench.

It is still to be determined if Allan McGregor (knock) and Jermain Defoe (hamstring) have a chance although Nikola Katic (knee) remains out.