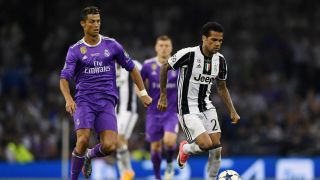 Dani Alves believes Real Madrid are a more dangerous side after selling Cristiano Ronaldo to Juventus.

The five-time Ballon d'Or winner – Madrid's all-time record goalscorer – joined the Serie A champions in a deal worth €112million in July.

But Madrid have claimed 10 points from their opening four LaLiga games under new boss Julen Lopetegui, with Ronaldo's old attacking allies Gareth Bale and Karim Benzema to the fore.

Former Barcelona right-back Dani Alves played in the Juventus side that lost in the 2017 Champions League final against Madrid before joining Paris Saint-Germain, and he feels Los Blancos now present a more varied threat.

"I think that, contrary to what everybody thinks, Madrid is more of a team without Cristiano," he told Marca.

He added: "It's not going to be so easy to beat Madrid, they are more of a team now. It's obvious that Cristiano is a brutal loss for Madrid, but Madrid are Madrid."

PSG launch their Champions League campaign at Liverpool on Tuesday, while Juventus travel to Valencia at day later.

Madrid begin the quest for a fourth successive title in another LaLiga-versus-Serie A clash when they take on last season's semi-finalists Roma.