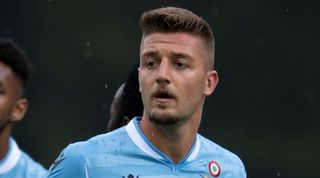 Milinkovic-Savic has been heavily linked to Man United in the past and was reportedly ready to sign last summer if Paul Pogba departed for Real Madrid.

However, no bid for Pogba was forthcoming and the Frenchman remained at Old Trafford for another season.

Pogba has spent much of the season on the sidelines due to injury, only playing eight games for United, and appears likely to depart in the summer.

Meanwhile, Milinkovic-Savic has been enjoying a fine season with Lazio - scoring four goals and assisting a further four in the league so far this season.

Lazio find themselves second-placed in Serie A and are just a point behind Juventus in what has been a better-than-expected campaign.

According to Il Messaggero (via the Metro), the Serbian's performances have convinced United that he's still the best option to replace Pogba.

But the move will only happen if United raise enough funds from the sale of the former Juventus midfielder.

Lazio are said to value Milinkovic-Savic at £109m and will be even harder to negotiate with should they secure Champions League football as expected.

Another headache facing United boss Ole Gunnar Solskjaer is that his Chelsea counterpart Frank Lampard is also reported to be keen on the player.

The Blues coach was believed to see Milinkovic-Savic as his ideal first signing in January following the removal of their transfer ban.

But the club opted not to spend in January and ended up signing Hakim Ziyech from Ajax on a pre-contract agreement in February.

It's thought that Chelsea will keep tabs on Milinkovic-Savic with a view to a possible bid come summer.