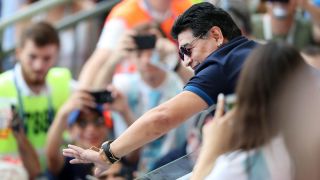 Diego Maradona bounced back from his health scare to watch Argentina take on France in the last 16 of the World Cup and was seen waving and blowing kisses to fans.

The Albiceleste great was given medical treatment following Argentina's dramatic 2-1 victory over Nigeria in their final game in Group D, during which he was seen making an offensive gesture amid exuberant celebrations.

FIFA urged Maradona to behave in a "respectful manner" after the game, while the 57-year-old denied reports he had been rushed to hospital.

In an interview with Telesur, Maradona said: "I want to let the whole world know that I'm more alive than ever."