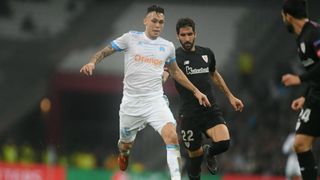 Lucas Ocampos scored after 36 seconds to help Marseille to a 3-1 home win over Athletic Bilbao in the first leg of their Europa League last-16 encounter on Thursday.

The influential Ocampos struck the quickest goal of the competition this season and added another after half-time to put Rudi Garcia's side within reach of a quarter-final berth.

Dimitri Payet was also on target for the hosts inside a blistering first 20 minutes as Athletic, now beaten in four of their last six outings, struggled to cope.

Aritz Aduriz did pull one back courtesy of a contentious penalty, but Ocampos' second left the Basque club needing to score at least twice in the reverse fixture to the turn the tie around.

The only blight on Marseille's victory was an apparent ankle injury for Florian Thauvin, who has scored 18 goals this season and is now in serious doubt for next week's return leg at San Mames after being taken off on a stretcher.

2009 - Dimitri Payet has scored his first goal in European competitions since 26 February 2009 (with St Etienne against Olympiakos), more than 9 years ago. Wait. March 8, 2018

Winless in their last five competitive fixtures, Marseille quickly put their poor form behind them with a breathtaking start.

Ocampos netted the first inside the opening minute, caressing a calm finish past Iago Herrerin after Thauvin expertly picked out his run to the far post.

The advantage was doubled in the 14th minute when Xabier Etxeita's horrendously hooked clearance dropped perfectly for Payet, who chested the ball down and rifled in a thumping finish.

And Marseille would have been out of sight midway through the half if not for Herrerin, the goalkeeper twice denying Valerie Germain in a quickfire pair of one-on-one opportunities.

Instead, they were gifted hope on the stroke of half-time as Aduriz converted from the spot after Adil Rami was harshly ruled to have handled the striker's close-range effort, referee Jorge Sousa awarding a penalty after consultation with his assistant.

Any confidence Athletic gained from that goal eroded 12 minutes after the restart, Ocampos squeezing Payet's low cross through Herrerin.

The 23-year-old went close to making it a hat-trick late on, but Etxeita redeemed himself as he desperately cleared Ocampos' goal-bound effort off the line to keep the two-goal margin intact.