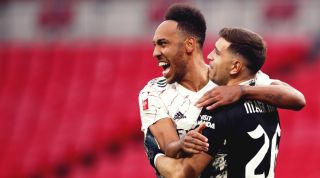 With three weeks left until the transfer window slams shut, Arsenal have not given up on bringing Houssem Aouar and Thomas Partey to the club - but they will have to sell players before they do.

Goalkeeper Emi Martinez's sale to Aston Villa is imminent, with the Gunners reportedly receiving £20m for the Argentinian. This could rise by an extra £5m, should Dean Smith's side avoid relegation again.

But this does leave a headache for Mikel Arteta. Martinez counts towards Arsenal's homegrown quota, meaning that if he wants to bring in another couple of players - plus a replacement for the outgoing stopper - the players that he offloads from the club must be ones that don't count towards the quota.

It had been reported that right-backs Ainsley Maitland-Niles and Hector Bellerin were being considered for the exit now that the club have brought in Portuguese defender Cedric Soares - but both players count towards the quota. It would therefore not be ideal to shift either.

Likewise, the Gunners' interest in Brentford keeper David Raya to replace Martinez was on a basis that the player was an alumni of Blackburn's academy and eligible for the quota. Proposed target Runar Runarsson from Dijon, however, does not meet the criteria - despite being £10m odd cheaper than Raya.

This leaves Arsenal with limited options of who to sell before the end of the window. Rob Holding, for example, was set to go on loan to Newcastle United before Arteta made a u-turn. This is partly down to a neck injury that David Luiz picked up but almost certainly down to the lack of homegrown talent in the squad. This means that an imminent bid from West Ham United seems unlikely to be successful.

Other players who seemed likely to leave earlier in the window now seem more likely to stay. Mohamed Elneny was deemed surplus to requirements on loan at Besiktas but Arteta has now spoken out about his talents. Likewise, Alexandre Lacazette - a target for Juventus - has spoken about his desire to remain in North London, with Arteta saying he'd prefer the Frenchman to compete with Eddie Nketiah for the starting berth up front.

Sead Kolasinac is set to be keen to return to Schalke, while the biggest interest in Matteo Guendouzi comes from Paris Saint-Germain - who are keener on offering player swaps than cash for the troublesome Frenchman.

Lucas Torreira is one player who looks more certain to leave by the day, with Torino and Fiorentina set to scrap it out for the Uruguayan. Shkodran Mustafi would no doubt be another left for the chop, were he not injured.

It's thought that Aouar and Partey could cost a combined total of £90m. The sale of Emi Martinez will go some way to helping but Arsenal will definitely need to jettison more stars for the two deals to go through.

FFT INTERVIEW 'We tried to get Timo Werner at Tottenham': Former Spurs scout has his say on Chelsea's new signings