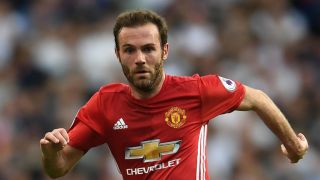 Manchester United midfielder Juan Mata is excited by the prospect of securing a "double bonus" against Ajax in Stockholm on Wednesday – a piece of silverware and a direct route back into the glamour of the Champions League.

The Dutch giants stand in the way of Jose Mourinho's men and a place in club football's elite competition, with the winners of the Europa League final guaranteed a spot in next season's Champions League.

United fell short of qualifying via a top-four Premier League finish – a 69-point haul leaving them sixth – meaning the Ajax clash assumes extra significance, a fact not lost on Mata.

Mata said in quotes reported by the Telegraph: "The Champions League is the best competition and it's one this club should be playing in every season.

"Now we are playing in the Europa League and if we win it as I did a few years ago [when Chelsea beat Benfica in 2013], it's a double bonus, as it's a trophy and a Champions League spot, so it's very important for us."

United are guaranteed European football next season regardless of how they fare in Sweden in midweek after finishing sixth, but Mata is under no illusions which competition the club should be aiming to be part of.

He said: "[Either way] we still want to play European football. Hopefully it is [in the Champions League on] Tuesday and Wednesdays, instead of Thursdays [in the Europa League], but if it's Thursdays we will play Thursdays and it wouldn't be an excuse not to try to win the title.

"Obviously you don't have as much time for recovery as you should, and we have lived that this season. But I think the club and the money [they have] will help us try to get a bigger squad and prepare for a different competition."

Mourinho offloaded Mata to United when he was Chelsea boss, meaning it was inevitable that speculation of a possible repeat scenario would arise when the Portuguese arrived at Old Trafford.

But Mata has featured heavily under Mourinho and has reiterated he is settled at the club.

"Yes, I'm happy here," he said. "I've always said that since I came here it has not been the greatest moment in the club's history. It's been a different approach and a new stage after Alex Ferguson. We've had a few managers, different players coming and going, but I feel really happy to be at this club."