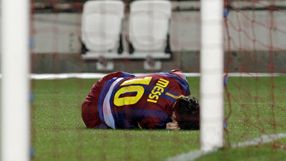 Argentina forward Messi, who is level on 27 goals with Real Madrid's Cristiano Ronaldo, has a bruised right knee after he clashed with Sevilla goalkeeper Javi Varas shortly before halftime at the Sanchez Pizjuan.

The World Player of the Year looked in severe pain but hobbled off the pitch unaided and was able to play the whole of the second half.

The draw in Seville, only the fourth time Barca have dropped points in the domestic league this season, trimmed the champions' lead over Real to five points with 10 matches to play after their great rivals beat Hercules 2-0 on Saturday.

The match also resulted in forward Pedro picking up an abdominal injury and left-back Maxwell straining a thigh muscle.

Both are "seriously doubtful" for Saturday's La Liga game at Getafe, Barca said on their website.

Club medical staff will monitor Messi's bruised knee, as well as a Daniel Alves ankle problem and an Adriano Correia calf strain, in coming days to determine whether they will be available for the Getafe match.