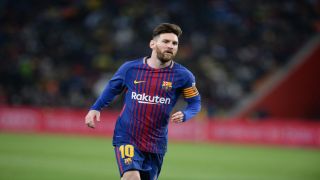 Lionel Messi is back in Barcelona training for the first time since his World Cup disappointment.

Argentina were one of Russia 2018's biggest flops, losing 4-3 to France in the last 16 after squeezing through the group stage thanks to a late Marcos Rojo volley against Nigeria.

Messi is still without a goal in the knockout rounds of a World Cup, although he did score a fine opening goal in the 2-1 defeat of the Super Eagles.

The 31-year-old will now get back to work with Barcelona, who he inspired to a domestic double in 2017-18 - Ernesto Valverde's first season in charge.

Defenders Gerard Pique and Jordi Alba, who also exited the World Cup in the first knockout round, were back in training with Messi on Tuesday too.

Messi will go into the 2018-19 LaLiga season without needing to come up against his great individual rival Cristiano Ronaldo, who has left Real Madrid after nine years.

Portugal captain Ronaldo was in training with new club Juventus on Tuesday after completiing a €112million move to the Serie A champions earlier this month.