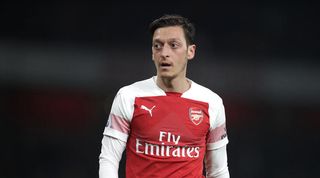 Mikel Arteta believes Mesut Ozil has been "unlucky" not to have scored or provided an assist under his management.

Arteta has made Ozil a key part of the Arsenal team again following his appointment last month.

However, the former Germany international has not found the back of the net in the Premier League all season.

And the playmaker has only registered a single assist since the start of the campaign.

"The demands that we have to put on him are to make the difference every single game,” Arteta said in the build-up to Arsenal's meeting with Chelsea on Wednesday.

“To do that he needs the right structure and players around him to help him to do that.

“I think he could have had more assists and probably more goals in the games he has played under me which has been a little bit unlucky but overall I think that his performance has improved a lot.”

The 18-year-old will not be playing for Brazil in South America's upcoming under-23 pre-Olympic tournament, and could represent Italy in the future instead - a switch that Arteta would welcome.

"[Martinelli playing for Italy] would be ideal,” he added. “It is up to him. He has his feelings and he needs to make his decision of what he wants. It is up to entirely him. But if he can play around the corner it would be even better.

"His mentality makes a big difference. I don’t know how the process when he joined and what he did to settle so quickly.

"But I can imagine he has the right people around him for sure, his family and entourage, and I think as well they really look after him and I think the club were very on top of him and positive about everything about him and his teammates were a big help.”