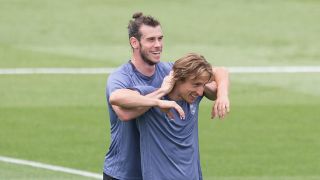 Luka Modric says Real Madrid's players have not been told whether Gareth Bale or Isco will be picked to start the Champions League final.

Bale has declared himself fit after recovering from a calf injury, but Isco has excelled while deputising for the Wales international as Madrid claimed their first LaLiga title in five years.

Zinedine Zidane insisted the duo can play together ahead of the Cardiff showpiece against Juventus, but Croatia international Modric said the team is yet to be decided.

"We don't have any indication [of who will start]," Modric said. "Gareth is a very honest person and player. They will talk and come to the conclusion for what is best for him and for the team of course.

"The team is the most important thing. Like I said, he is very honest and he will say how he feels. But we are very happy that he is back."

Bale has had an injury-affected season, missing two chunks of the campaign as Madrid seek to become the first team to defend the Champions League title since the competition was rebranded.

Back in training with the boys, all focus towards Cardiff May 26, 2017

And Modric opted not to compare Bale with Isco as they look set to vie to be the third member of the Madrid forward line alongside Cristiano Ronaldo and Karim Benzema.

"It's been a very difficult season for [Bale]," Modric said. "At the start of the season he was unbelievable, he was one of our best players. Then he had his injury.

"It is not something that is nice to happen to a player, especially Gareth. He had a very difficult second part of the season, but now he is back and we are very happy that we can count on him. He has showed that he is prepared for the final.

"We showed all season that no matter who plays, we play well. It is difficult for me to say who is better. We have shown that we play at a great level with Gareth and with Isco.

"It doesn't change for me. For us it is important to be all together. If we fight and we run all together like we have in big games this season, we are a very dangerous team and very strong."