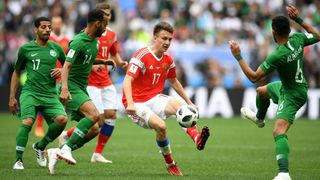 Monaco have made an offer for CSKA Moscow's Russia international Aleksandr Golovin, according to the Ligue 1 club's vice-president Vadim Vasilyev.

Golovin was one of the stars of Russia's surprise run to the quarter-finals at their home World Cup and Chelsea have been linked with making the attacking midfielder one of the first signings of the Maurizio Sarri era – following Jorginho's big-money arrival from Napoli over the weekend.

But Monaco have already made their move, with Vasilyev telling the 22-year-old Leonardo Jardim's first-team squad acts as a more reliable proving ground for young talents.

"We made CSKA a proposal for Golovin," Vasilyev told Sport-Express. "I cannot say the amount of the transfer, but it is very worthy.

"The duration of the contract [would be] five years.

"I think in this situation the transition to Monaco is the most correct option for Golovin.

"To go immediately from Russia to a top club in the leading European league is very risky.

"We are able to launch the career of young players. It is enough to look at Kylian Mbappe."

Mbappe made a stunning breakthrough at Monaco as they stormed to Ligue 1 glory in 2016-17.

The teenage forward then moved to Paris Saint-Germain and was named as the outstanding young player of the World Cup after scoring in France's 4-2 final victory over Croatia on Sunday.